Why We Don’t Believe in ‘Band-Aiding’ Your Plumbing Pipes 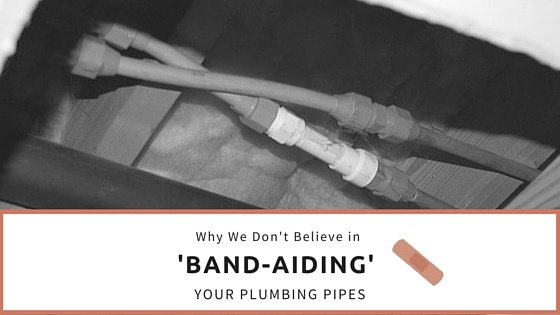 When I came to Nu Flow, I had much to learn about pipe relining. It didn’t take long to realize I also needed to learn much more about plumbing pipes in general. You see, I hadn’t given plumbing a great deal of thought. When I wanted a drink of water I turned on the faucet. When I took a shower the hot water was just a twist away. I took for granted just how valuable it is to be able to flush a toilet and have everything just carried away. I lacked an appreciation for how a plumbing network provides services we have come to expect. I never considered plumbing had a lifespan, and eventually, it would need to be replaced or otherwise upgraded. As I look back on the previous four years, I realize I am far from being alone in my appreciation.

When I first started down this trip to bring quality epoxy pipe re-lining to Illinois and the Chicago area, most of the push back I got was “it’s not allowed in the city” and “you haven’t completed a job in Chicago”. We have since overcome those hurdles with approvals on both the city and state level as well as a completing multiple large high rise projects. With these hurdles out of the way, I have an even larger obstacle to overcome. That is the temptation for Chicago building owners, managers and HOA’s to band-aid plumbing problems and move on. I have seen magnificent, expensive condos in downtown Chicago that have hot water pipes so corroded that the hot water flow is down to a trickle. There is no way people living there are getting adequate water for hot showers, yet nothing is being done. We have opened walls to see entire sections of pipe missing. I can’t tell you the number of times we’ve seen multiple clamps barely holding a piece of pipe together, and still they slap another clamp on to “fix” the problem. People just don’t give much thought to the intricacies of plumbing and what extensive damage occurs when water pipes that are under pressure experience failure. It happens every day in Chicago.

According to a survey conducted by the American Society of Civil Engineers (ASCE) in Illinois in 2014, infrastructure in the state received a C- rating. Sadly, that was an improvement from previous years. What we’ve seen behind the walls of many of the city’s buildings, that rating may be optimistic. Building owners are somehow simply content with patchwork repairs that escalate annually both in terms of number and expense. It has me frequently wondering to myself what is behind this lack of urgency when it comes to replacing or rehabilitating plumbing systems? Is it the failure to understand the condition of the plumbing or its complexities? Is it a lack of understanding that pipes get old and will not fix themselves? Is it the fear that the project may be too intrusive or is it the costs? Yes, I understand that we aren’t solving a hunger crisis or third world problem by completely fixing your plumbing – but if your building were to wake up tomorrow with everything ruined due to burst pipes – would that be a crisis to you and your daily life?

We created our complete pipe assessment program to address many of these issues. It is designed to better help decision makers understand what is going on behind their walls and develop a plan to address growing problems cialis generico prezzo. It is not in my nature to fix problems with a band-aid approach. At some point, property is placed at risk. Tenant inconvenience can cause significant financial, if not legal issues.

So why the lack of urgency?