Why Polybutylene Piping Could Lead to Structural Pipe Failure 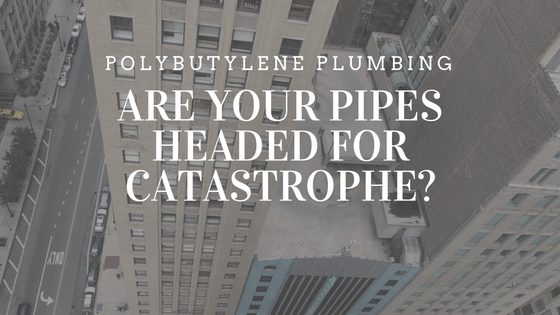 Do you have polybutylene piping in your Chicago residential building? If you do, you may want to schedule an inspection and start making a plan for its replacement. Polybutylene water pipes are extremely susceptible to chlorine corrosion. Over time, the pipes degrade from the inside out, leading to leaks and catastrophic failures.

lines. It was extremely popular due to its inexpensive cost and presumed high durability. Contractors often chose it as a replacement for copper piping. The exterior is typically blue or gray, and it was installed with a combination of plastic and metal fittings.

If your residential high-rise building in Chicago has polybutylene water supply pipes, you can find them running from your water meter to your water heater, under the sinks and behind toilets in your public area bathrooms, break rooms and kitchens. The pipes are typically blue or gray but may be black. If you find the blue or gray pipes in these locations, there’s a good chance that is it polybutylene.

Because the pipes corrode from the inside out, there is often no warning before complete structural pipe failure. If you have polybutylene pipes in your building, it is best to get them inspected immediately and start making a plan for their replacement.

Polybutylene Piping in Condos and Co-ops in Chicago

If you find polybutylene pipes in your condo or co-op tenant units, you are required to disclose that information to any potential buyers or shareholders. Polybutylene pipes are considered structurally unsound and a potential hazard due to their penchant for failing without warning. In order to protect yourself from future liability and water damage to your Chicago residential building, you will want to replace your polybutylene pipes with anther type of material, like PEX.

If your building has polybutylene pipes, you may want to consider replacing them with PEX, which is a durable and flexible type of piping that can be used in place of polybutylene. PEX is resistant to corrosion from minerals and chlorine, and it requires fewer fittings than copper and PVC. It is also color coded for cold and hot water lines. If you are considering replacing your polybutylene pipes with PEX, we can put you in contact with our plumbing partner Althoff, and together, we may even be able to determine a solution that combines pipe lining and pipe replacement plan that will save you money during restoration.

If you are uncertain of the types of pipes in your building or whether or not your pipes would benefit from epoxy lining, call us to schedule a building pipe assessment, which is an examination of all of your building’s pipes, their age and corrosion levels. We can also give you an estimate for when you need to replace or line your pipes before you experience a structural pipe failure.

To learn more about our pipe lining services or to schedule a building assessment, call us at 815-790-9000.