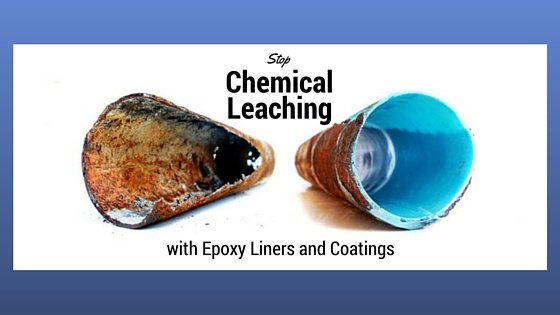 When it comes to restoring the plastic potable water pipes in your apartment building, condo or co-op in Chicago, you want to be assured that the epoxy liners are safe and will not leach chemicals into your resident’s drinking water. All epoxy coatings and liners that are to be used for potable water lines must go through rigid testing and meet or exceed certain safety standards. By contrast, plastic pipes, especially PVC, often leads to chemical leaching drinking water.

Epoxy liners and coatings comprise relatively new technology that’s been developed within the last two decades. Lining and coating pipes with epoxy presents a way to restore the structural integrity and longevity of existing plastic piping at a fraction of the cost of replacing those same pipes, and it may even improve the quality of your drinking water.

Epoxy pipe liners are initially malleable tubes that are coated with a resin and threaded through your existing pipes where they are inflated with a bladder until they firmly seal against the sides of your pipes. Once the liner has been firmly pressed into place, it is left to cure. The curing process allows the flexible liner to become a rigid inner pipe.

The epoxy used in pipe lining is sometimes referred to as two-part epoxy. This is because there are two primary components to the mix, including a hardener and an epoxy resin. These two components are mixed together to form the epoxy pipe coating, and after proper pipe preparation, the mixture is blown through the existing water pipes and left to cure for an appropriate amount of time.

In order to be used for potable water lines, epoxy coatings and liners must go through rigid testing and meet certain safety criteria before they can be used. In fact, very few other plumbing materials have undergone the degree of testing that has been performed on epoxy pipe liners and coatings. This means that a properly installed and cured pipe liner or coating will not leach any chemicals into your residents’ drinking water.

Numerous tests have shown that epoxy liners and coatings can stop chemical leaching from various types of plastic pipes. Polyvinyl Chloride, also known as PVC, is a standard plumbing material impotenzastop.it. PVC contains high levels of chlorine and phthalates. The phthalates used to soften the PVC, which is considered a benefit during installation, can cause negative health consequences, especially during the manufacturing process. In fact, the presence of phthalates in the PVC causes the release of dioxins when the pipes are manufactured.

Phthalates and dioxins are harmful to human health. They can cause reproductive problems as well as hormone imbalances, especially in the endocrine system, and you can be exposed to these chemicals if they leach into your drinking water from your PVC pipes.

By contrast, epoxy linings and coatings do not release harmful toxins, chemicals or minerals into your drinking water. Instead, the epoxy forms a watertight barrier between the material of your pipes and the water you drink.

Here at Nu Flow, we specialize in epoxy coatings and pipe liners for potable water pipes. Coatings and liners can be used to successfully restore corroded and worn water supply pipes, effectively extending their useful lives and potentially improving the quality of your water while saving you money.

For more information on how our pipe restoration techniques can improve the health and safety of your potable water, call us at 815-790-9000.