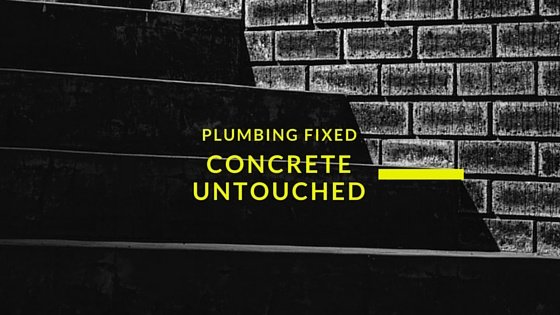 In regards to Nu Flow’s work at Chicago’s U.S. Cellular Field questions have revolved about how it came about, what we did, and how we may be able to help other arena and facility managers in the Chicago area solve their plumbing problems by pipe lining pipes in concrete. As the new baseball season approaches, we thought it would be a good time to respond to some of these questions.

How it Came About

We were actually contacted by a plumbing company who was replacing plumbing at the stadium. They were taking care of the easier to reach plumbing, but were not looking forward to dealing with plumbing buried deep into cement. More than than that, just a year earlier, they had experienced using jackhammers to tear up surfaces around concession stands to replace piping, and then re-pouring concrete around the pipes. That was obviously a much more labor intensive and costly process they would prefer not to repeat. Our Nu Flow pipe-relining service.

Pipes buried in concrete is a significant issue in these facilities as it is a common construction technique. Piping should have a 20-30 year lifespan, which should parallel the life of a stadium today. The problem is the amount of beer and soda being poured down, and left in the drains for long periods of time. This acidic liquid prematurely corrodes many of these pipes, a situation similar to that which is going on right now at other arena’s, theaters and nightclubs across Chicagoland. It is a bit of a surprising issue especially in newer construction.

Keep in mind, at U.S. Cellular Field they had to keep jetting their lines every couple of months just to keep them flowing. The jetting would open up a center area in the pipe, but it never did return to a “full flow”. With our innovative epoxy relining system, not only did they regain that full-flow, but the smooth, interior surface means they may never have to jet again. These are the things a facilities manager loves to hear. It is just part of what makes pipe lining for pipes in concrete so attractive. No invasive construction and improved flow for potentially decades.

Keep in mind, it doesn’t have to be all or nothing with Nu Flow. Many pipes in stadiums are easy to access and replace. Many are very visible and in long runs. Replacement can actually make more sense than relining in some cases, but when you need pipe relining for pipes in a foundation or set in concrete, Nu Flow can make an excellent partner. We will work with your contractor or we partner well with Chicago’s respected Althoff Industries.

Many facilities, like U.S. Cellular Field, have relatively short “seasons’. This can’t be interrupted by large mid-season projects in visible areas. It is simply contrary to the experience customers expect. If you are a Chicago facilities manager, consider all your alternatives, including the non-invasive, pipe-relining process from Nu Flow Midwest.