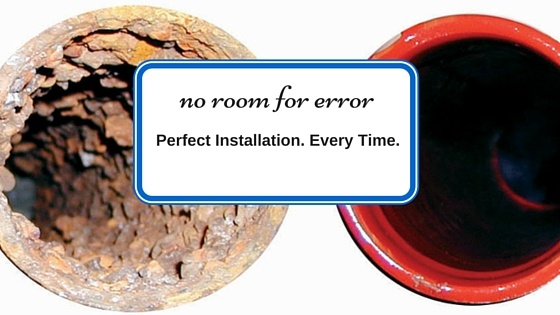 An article written three years ago on InsuranceThoughtLeadership.com has been brought to the attention of us at Nu Flow Midwest on several occasions, enough that we thought it would be appropriate to address the epoxy pipe re-lining thoughts from the article on our blog.

The article initially talks about the strength and durability of epoxy and then goes on to state “This method is touted as a fast, 60 year, non-invasive, and inexpensive alternative to re-piping a whole building.” We agree that many tout epoxy linings to last 60 years or even longer. Nu Flow offers a 10 year installation guarantee. We would also agree that it is much less invasive than the demolition that can be associated with pipe replacement. Even we wouldn’t suggest that pipe re-lining is “inexpensive” but it certainly is a much more affordable solution than complete re-piping.

The part of the article that is bothering some readers is the part where it states “…when applied incorrectly, epoxy coatings can create a dangerous sense of false security…” Let us be upfront about this. At Nu Flow Midwest, we agree 100% with this statement.

The key here is “when applied incorrectly”. In fact, most things were done incorrectly are likely to be sub-par. Paint that is incorrectly applied can lead to peeling. Tires that are manufactured incorrectly can be dangerous. You likely won’t be happy with a doctor who does his work incorrectly. Interestingly enough, the article later says that if applied correctly, these failures wouldn’t be recognized.

At Nu Flow Midwest, we are certified by Nu Flow, one of the most trusted names in world-wide epoxy pipe relining. We know failures can occur when pipe-relining isn’t done carefully and properly. Galvanized piping in particular, must be assessed appropriately. It is why we are extremely detailed in our process. When we control the process, there is no question that it works. We partner closely with Althoff Industries, who has been keeping buildings healthy in the Chicago area for over 55 years. This puts every aspect of your pipe-relining process directly in our hands without the use of subcontractors. We monitor the installation process closely with electronic testing devices and forms.

We don’t think it is noteworthy to state that a product or service is bad “when applied incorrectly”. It sounds like it is painting the portrait of a scam. Of course something “applied incorrectly” will likely fail. We do think it’s important to know that epoxy relined pipes have been successfully in place in Europe for decades. Relined pipes are being used for potable water pipes and drains in hospitals, government buildings, and colleges. They have been proven both safe and effective…when applied correctly.