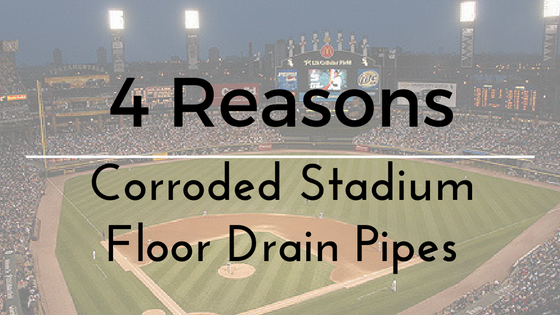 When you think about the Chicago White Sox and seeing a home game at US Cellular Field, you probably dream about eating hotdogs, giant pretzels and French fries while drinking massive glasses of soda pop and beer. Unfortunately, all that soda and grease has taken a toll on US Cellular Field’s drain pipes, leading to severe corrosion, and we have recently been commissioned to reline 100 feet of their stadium floor drain pipes cialis generico prezzo.

When it comes to residential, commercial and public venues, certain liquids and foods should never be poured down a drain. This includes grease, oils, sodas, beer and flushed trash. When these items are poured down a stadium drain pipe, they corrode the pipe and clog it, significantly reducing its expected life. Complicating matters is the way floor drains work.

Floor drains collect wastewater from multiple areas, which increasing the amount of corrosive drinks and clogging materials that flow through each stadium drain pipe.

Almost everyone knows not to dump grease, animal fats and vegetable oils down their home, apartment or condo drains because it cools as it flows downward, and over time, it can clog the drain, causing a backup. The same thing happens to stadium drains, except it’s on a much larger scale. As the food court workers prepare food, grease spills onto the floor and surfaces where it is often squeegeed into floor drains. Small amounts of grease from cooking certain foods may also be poured down the floor drains. With each pour, the floor drains become a little narrower, until wastewater can no longer flow through the pipe.

During each event hundreds of gallons of soda are poured down various drain pipes, from the stadium drain pipe connected to the soda fountain to the bathroom sinks and floor drains. When enough soda is poured down a drain over a period of years, the acids in the syrup and chemical reactions from the carbonated water, slowly cause the drain pipes to corrode, thinning the metal walls and leading to pipe failure.

Beer is another carbonated beverage that destroys stadium drain pipes. As the beer flows through the drain lines, it slow eats away at the inside surface of the pipe. As a result, the pipe walls become increasingly thinner until cracks and holes form. Once the pipe is compromised, it makes it easier for other objects to become stuck in the pipes.

Imagine a long stadium drain pipe, already corroded and half-clogged from grease, beer, and soda. Then, your event attendees start flushing kleenex, napkins and sanitary products down your bathroom toilers. This is the recipe for a stadium drain line disaster. The flushed trash becomes stuck in the grease and debris, leading to clogs and drain line backups.

Here at Nu Flow, we understand the hazards of soda, beer, and grease on your stadium drain lines, and we have a solution. Our team of professional pipe liners can clean your floor drains and drain lines then install pipe liners, which function just like your original drain lines once they are cured, except the caustic chemicals from beer and soda won’t reach the host pipe. Instead, it will flow through the pipe and into the sewer system. This helps prevent stadium floor drain corrosion and can extend the useful lives of your venue’s floor drains so that you and your guests can enjoy the game instead of worrying about backed up drains.